Ethereum (ETH) could yet make one last bullish move against Bitcoin (BTC) before the next major downtrend kicks in. It is quite probable at this point. We can see on the daily time frame on the ETH/BTC chart that the pair might shoot towards the 200-day moving average and print a fake out before the actual downtrend begins. The stakes are too high at this point and this might be the last opportunity the market makers and the whales get to trap in as many bulls as possible before the next major downtrend. Once the price starts to crash below the bearish pennant that it is currently trading in, it will become too obvious where it is headed and therefore the big players do not have much time to trap in the bulls.

We have already seen the market begin a decline but it is not likely to last for long. In fact, it is more likely to be a false signal and the market will soon make a move to the upside once a large number of bears start shorting the market. This is what all of it is about on shorter time frames. The trend is quite clear on larger time frames but near-term the big players will continue to prey on the retail traders that rely on hoping and wishing rather than pragmatism and common sense. The 200-day moving average on this chart as well as the ETH/USD chart is what we need to look at for the beginning of a potential uptrend. Until and unless the price breaks above that level and tests it as support multiple times, there is no bullish case at all. 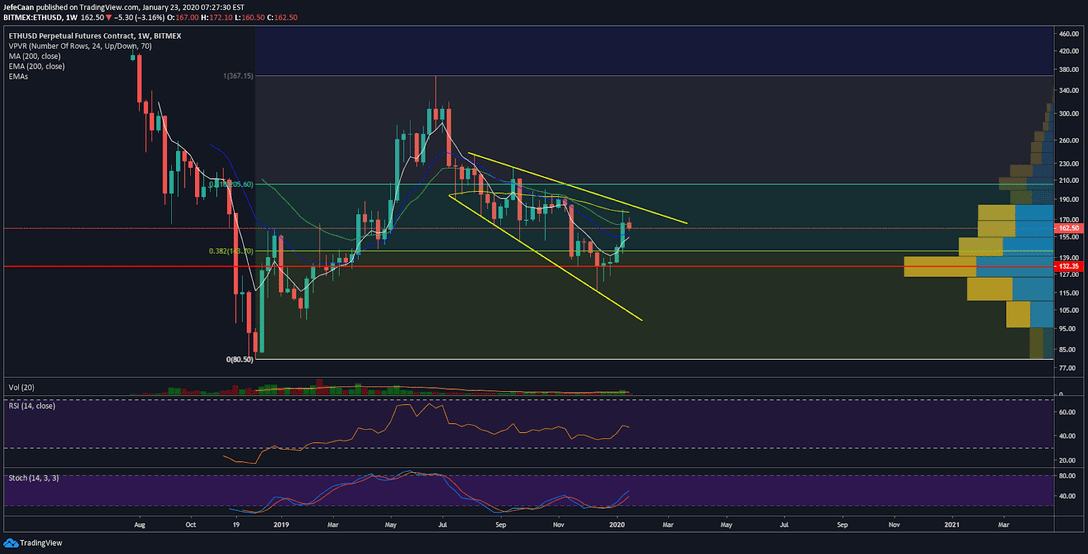 The weekly chart for ETH/USD shows that Ethereum (ETH) has room to rise to the top of the descending broadening wedge before the next decline. It could be a short-lived move but it could still happen. If a large number of retail traders enter short positions at this point, then the big players would have an incentive to pump the price higher to trigger a short squeeze and prey on the retail bears.

It is very important to be realistic here and to keep it as simple as possible. There is absolutely no reason to FOMO into the market. If the bullish cycle begins, believe me, you would know about it. To put it simply, just look for two or three retests of the 200-day moving average on the ETH/USD chart. Sure, you might miss a 40% or even a 60% move but will it matter in the grand scheme of things if we have entered a bull market? On the other hand, think about FOMO’ing into the market now when the trend is bearish by definition and risking a loss of 60% or more and the market taking months if not years for confidence to restore. I think it is pretty straightforward and it is important to keep it that way.