Bitcoin steps back up after a sudden dip

This happened within a trading day where a high-volume transfer to a Bitcoin exchange wallet (now correctly identified as OKEx) transpired. With the major cryptocurrency trending upward in a bullish run since late December of 2020, this was seen by some analysts as a sign of an incoming major market correction.

In an analysis, Ben Lilly observed that there are three sectors driving the current liquidity crisis: Grayscale inflows, institutional investors, and DeFi (decentralised finance). The chart below indicates the quarterly report from early 2020 to mid-year, showing that 390k units of BTC went into Grayscale, with institutional investors such as Michael Saylor of MicroStrategy receiving 71k BTC, and 42k BTC for Elon Musk. Further institutional investments from Square, Bitwise, Stone Ridge Holdings, and Ruffer amount to another 72k BTC, according to Lilly's estimates. Decentralized Finance also guzzled up 160k BTC, flowing it into the Ethereum network. 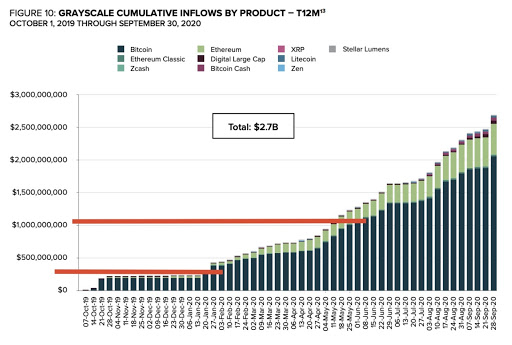 Now, why the sudden dip to US$47k then? Alessio Rastani, a crypto analyst, noted that this hasn't happened since the last peak of the cryptocurrency. In his video analysis, Rastani said that what happened today also showed "risk warnings on BTC similar to what we saw in December 2017."

The indicators Rastani designed were made to point out "acceleration extremes" which are based on overbought, overextended, over-stretched, and extremely accelerated. This signals an "inflection point" in the price relative to its market capitulation, according to Rastani.

During the opening hours for the Asian market today February 22nd, BTC was seen trading at a high US$58,3k. It later rebounded to trading around US$54k within the day. This led traders such as John Cho, Director of Global Expansion at Ground X, to exclaim that this was, by far, "The bloodiest day we've seen so far in 2021." adding that "Leverage liquidations triggered a cascade of selling to a price point I didn't think I'd see this soon (or this quick)."

The 10% drop in BTC was soon followed by a 12.8% dip in ETH, after trading well over $2k in several major exchanges during the opening hours, which as of press time is back to US$1.7k. According to data from Messari, the decentralised finance sector also suffered losses amounting to almost -7%, with 24-hour trends across major projects such as Uniswap, AAVE, and Maker all seeing red-digit losses.

Despite snide remarks that these prices "seem high" from crypto whales such as Elon Musk, confidence in BTC remains as the larger crypto industry moves in with institutional adoption and further regulation, firmly securing its place as a viable investment and payments technology.