BENQI Teams up with Avalanche on $3M Liquidity Incentive Campaign 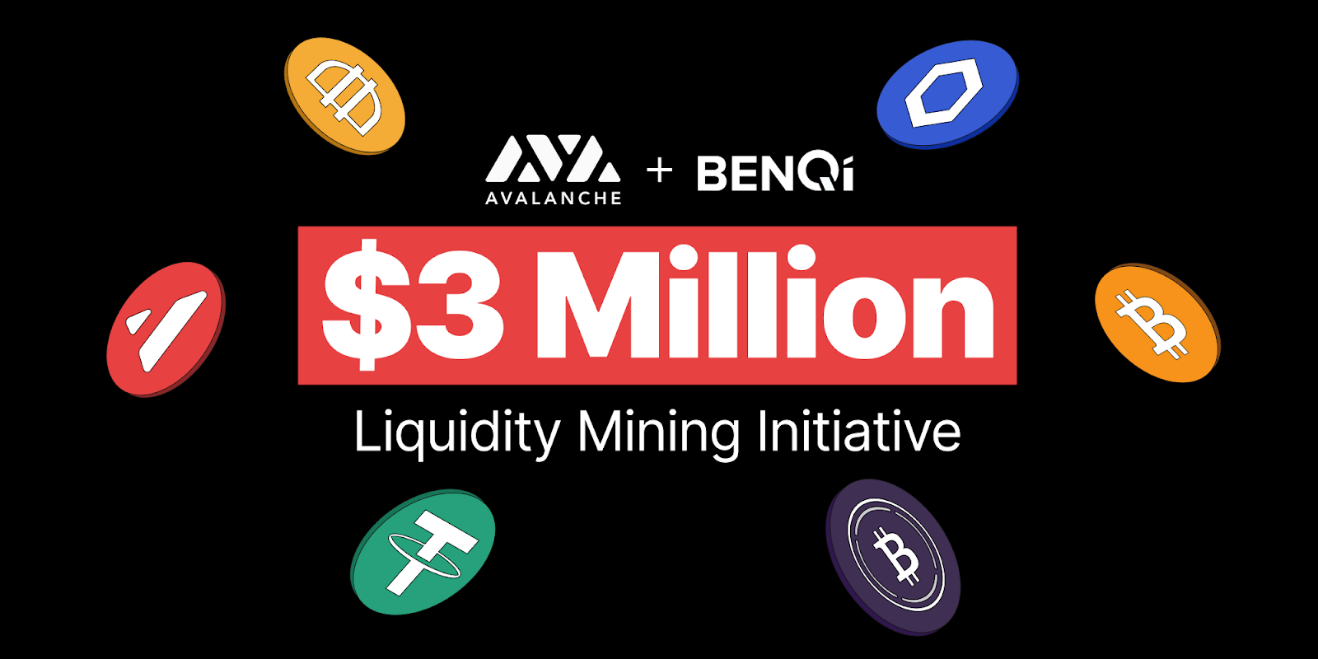 BENQI, a non-custodial algorithmic liquidity market protocol, is joining forces with Avalanche to launch a liquidity incentive campaign with a total reward pool worth of $3 million.

The joint liquidity mining initiative is celebrating the launch of BENQI protocol on Avalanche. Upon completion of its official debut BENQI will be one of the first liquidity market protocols within Avalanche’s DeFi ecosystem, providing its community a lending and borrowing marketplace.

Avalanche will help catalyze the birth of BENQI through allocating $3 million worth of its native token, AVAX. The rewards will be offered as liquidity incentives to users borrowing and lending AVAX, ETH, LINK, wBTC, USDT, and DAI on the protocol with BENQI. The high throughput Avalanche blockchain will also empower holders of BENQI token ($QI) to access DeFi services and regain control over their strategies.

BENQI’s users can lock their assets to generate yield-bearing tokens or issue assets borrowed from other protocols without the impediments of high network fees or risks of centralized systems. Then, they can activate their idle assets by lending and borrowing in an over-collateralized, permissionless manner.

Avalanche’s compatibility with the Ethereum network, which will be expanded with the launch of Avalanche Bridge, offers minimal friction for user mobility from Ethereum to Avalanche. This mechanism helps break down barriers to entry for new DeFi projects and increase the flow of capital across the entire sector.

As such, BENQI envisions Avalanche to be one of the premier settlement layers for DeFi users and developers. However, apart from its existing Ethereum to Avalanche bridge, it also plans to build bridges to other blockchains.

Listing on Avalanche is the latest milestone for Benqi, which recently raised a total of $6 million in a strategic funding round. Participants included a clutch of reputable venture capital and DeFi investors, including Arrington XRP Capital, Dragonfly Capital, Ascensive Assets, Mechanism Capital, TRGC, Woodstock Fund, and Spartan Group.

"Decentralized finance (DeFi) is primed to take off on Avalanche with the arrival of another cornerstone DeFi functionality. BENQI is joining a rapidly growing ecosystem of DeFi users, assets, and applications on Avalanche, and we expect users and developers to leverage BENQI to expand the utility of their assets,” said JD Gagnon, Co-Founder of BENQI.

This campaign will enable BENQI to gain broader recognition within the Avalanche’s strong community across the globe. Placing the BENQI project in front of thousands of DeFi users encourages them to provide the order book depth and contribute to the BENQI ecosystem while earning rewards to supplement their yields.

“BENQI is launching at a key moment for Avalanche users and the broader DeFi ecosystem. Its technology adds a missing piece to the puzzle, and will make Avalanche even more attractive to users being priced out of other networks. This is an exciting step in a broader community initiative to bring more assets and liquidity onto the platform,” added John Wu, President of Ava Labs, a team supporting development on Avalanche.

Avalanche has experienced tremendous growth over the last year as the Total Value Locked (TVL) on the network pooled $233 million worth of assets across all DeFi protocols. The open-source network offers in excess of Visa’s level throughput (4500 tps per subnet), sub second finality and low gas fees. This allows to scale the number of validators to millions, all participating in consensus at the same time, as well as offering a highly customisable interoperable heterogeneous platform.