How will The London Hard Fork Affect Ethereum's Price?

The much anticipated Ethereum Improvement Protocol 1559 or “London hard fork” is due to take place today, with the upgrades impact on the price of Ethereum hotly debated by industry professionals.

Ethereum developer, Tim Beiko,  confirmed the countdown to the upgrade is nearing its end, stating in a Twitter post “can’t wait to see this go live in 11h-ish hours!”. 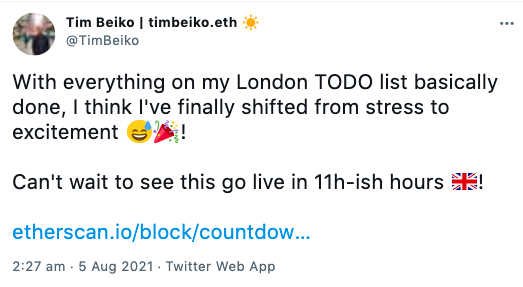 The London hard fork plans to introduce several Ethereum Improvement Proposals, the most hotly anticipated of which is the EIP-1559 which aims to make transaction fees more predictable and will introduce a base-fee burning mechanism which will effectively work to limit supply and is expected to create a deflationary aspect to Ethereum.

How this will affect the price of the second largest cryptocurrency is debated. Investment banking giant Goldman Sachs outlined their thoughts on the ‘deflationary’ impact of EIP-1559 stating in an Investors note:

“The London upgrade will not make ETH a deflationary asset by default. Mainstream media has long touted the idea that burning the Base Fee, would turn ETH deflationary, thereby making it a more attractive store of value for investors. In order for this to happen, the Base Fee burnt would need to offset the ETH issuance rate (i.e. block reward). Some commentators go as far as comparing the Base Fee burning akin to a share buy-back, which takes part of miner’s revenue and internalizes it. What the upgrade does do is decrease the overall ETH inflation rate, while making ETH itself sometimes inflationary and sometimes deflationary. More interestingly, greater Ethereum network activity will mean more ETH burnt as Base Fee and less ETH for miners to resell in the market, potentially reducing miner selling pressure.”

Some have used last years Bitcoin halving as a means of comparison to the Ethereum upgrade, when Bitcoin's block reward was halved from 12.5 to 6.25 bitcoin in May 2020 and resulted in a supply shock that sent the price rocketing.

And while some Ethereum developers believe that the annual supply of Ether could be reduced by as much as 1.4%, others seem to err on the side of caution with regards to the impact this will have. Ethereum developer at ConsenSys, Ben Edgington, told MarketsInsider that the developments will unfold only once the upgrade is deployed.

Despite some hesitation in the crypto community, Ethereum has seen an uptrend following this weekend, and is on its way to reach $3,000 if it continues following the upgrade. Investors will be watching the space with much scrutiny to see the effects of the London hard fork, which may see positive sentiment surrounding the upgrade shoot its price upwards of $3,000 over the coming days and weeks.