The crypto-exchange DeversiFi has put their users at ease following an erroneous transaction in which a miner received $23.7M in a gas fee payment. They recently confirmed that the user was returning the 7626 ETH that was originally paid.

DeversiFi revealed via Twitter on Monday that a deposit transaction took place at 11:10 UTC on the 27th September using a hardware wallet from the main DeversiFi user interface with an erroneously high gas fee.

They later confirmed that the transaction fee was an internal error, and the miner of block 13307440 would be returning the gas fee:

“No customer funds on DeversiFi are at risk and this is an internal issue for DeversiFi to resolve. Operations are unaffected.” 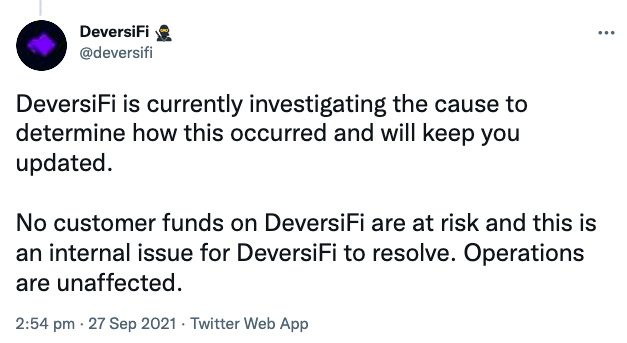 The DeversiFi Twitter account addressed the human issue that still can affect the immutable nature of the blockchain, adding that “the blockchain is immutable. But the revolution we are part of is defined by our values as humans.

DeFi platform DeversiFi was incubated by Bitfinex in 2017 and launched in 2018. The self-admitted slip up by the DeFi platform was part of newly implemented EIP-1559 type of transaction which is designed to make Ethereum fees easier to predict.

The Ethereum miner in question is one of the top ten miners, according to the address provided, and is responsible for mining a total of 3.1848% of all Ethereum blocks in the past seven days.

While the miner returned the fee on this occasion as a gesture of good will, it would have been difficult, if not impossible, for DeversiFi to enforce the return of the 7626 ETH.