How Can Projects Solve the ‘Token Not Needed’ Tokenomics Problem?

After the ICO craze, a lot of projects were closed and did not release any products or left their tokens abandoned. They raised money when they did not have a minimum viable product or didn’t attach issued cryptocurrency to the product economy properly. Though raising funds through a coin offering was an option even for teams with nothing but a website and a white paper.

Another problem also made investors look at this market with doubt - the US Securities and Exchange Commission (SEC) classifies most tokens as securities - many projects were banned for violating current laws. According to most regulations, sold tokens from day-zero should be equipped with some well-defined utility.

Thus, many projects struggled with the “chicken and the egg” issue of launching a project without capital. Without capital, projects could not get off the ground.  Without anything to show to the public, projects would have trouble raising capital.

While these projects may have found success raising capital via an ICO – many were later trapped with the painful reality that the issued tokens had no viable use cases.  Dreams that a successful project would equate to a rising token price were soon met with the harsh reality that such ties were not as linear as initially expected.  And while many successful crypto projects continue today – it would not be surprising to see that this success had very little carryover into the relevant tokens that were issued to get those projects off the ground to begin with.  But why?  And how could this happen?

When the Dead Coins Are Born

A cryptocurrency token can be described as a type of privately issued currency when a company decides to issue tokens instead of "traditional" shares.

Projects issue their own currency in the form of digital money as cryptocurrency to self-govern their business model and empower their users to interact with its products while facilitating the distribution and sharing of rewards and benefits to all of their stakeholders.

The problem comes in if this company could actually live without any tokens. In this case, many projects attach slight utility to their tokens just to give them the purpose of living. In most cases, the first and the only utility of an issued token is the ability to pay for services, often with a discount if other means of payment are implemented as well. This approach is often referred to as AppCoins.

Issuing tokens as a means of fundraising and then giving them little or no function puts companies in a dangerous situation. If the project succeeds with the product and gets real product users, there still will be a group of token-concerned people: investors and traders. Some hope that the utility will grow as more users come, and immediately fall into a logical mistake.

The token’s utility has already been defined up front.  Whether a project has one user or 1,000 users, the token will not achieve more utility given this tokenomic model.  While the token may rise against a fixed supply and increasing demand, it is unlikely that it will appreciate significantly if the model is ultimately to use the token to consume the service.

Hodling the token would be akin to hodling the service, something that makes little sense, especially for projects which are accepting fiat or other crypto as forms of payment, thereby nulling the effects of hodling or general long-term holding of the token.

The creators of IQ Protocol put together the pitfalls of issuing tokens of discount/product access utility. They divide the project community into three groups with different or even opposite interests: utility users, investors, and traders (or speculators). 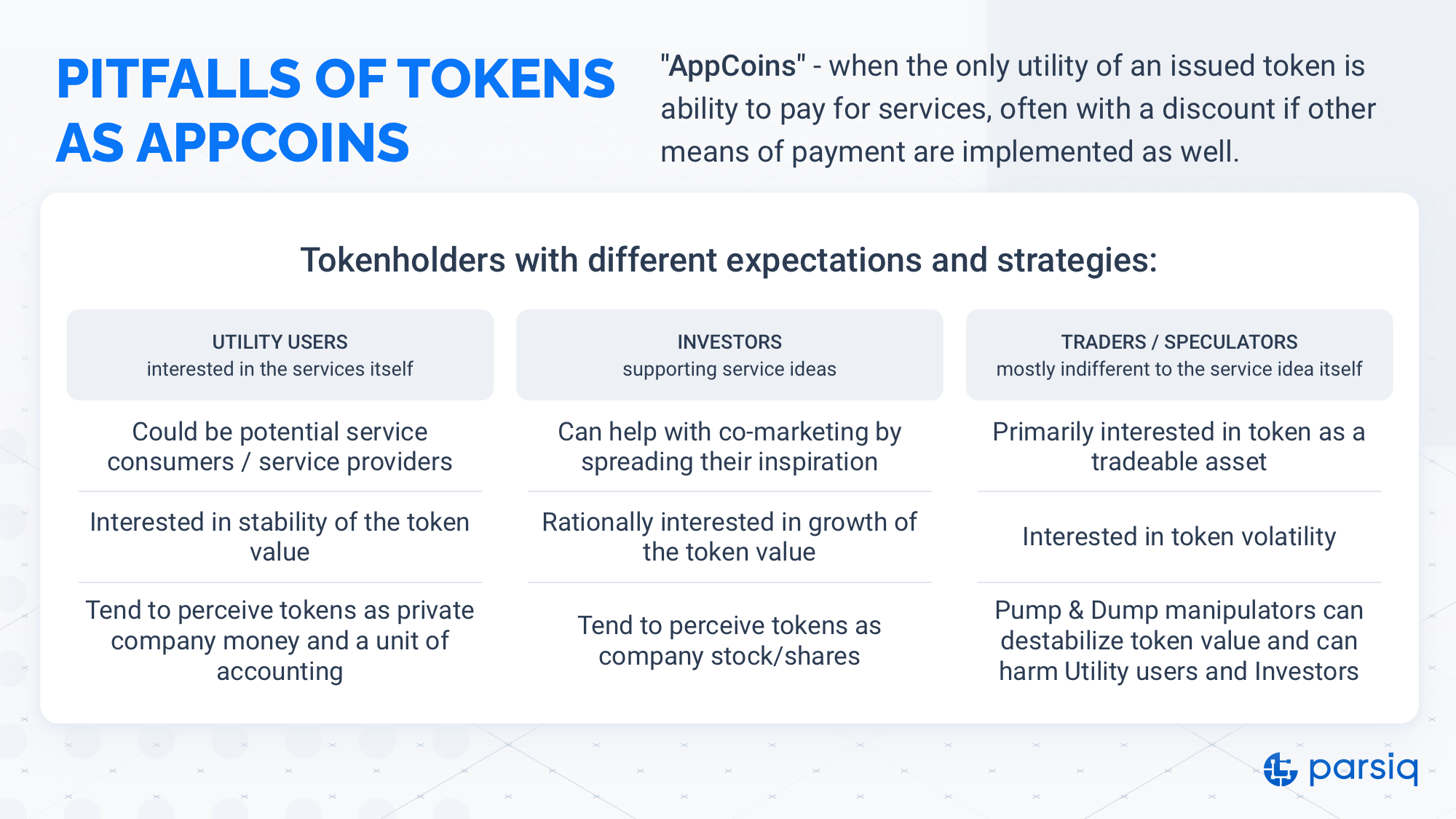 Having all these interests aligned in a single circular economy means having a stable ground for cryptocurrency projects.

The developers of IQ Protocol have created the ultimate “plug and play” tokenomics model. This solution, which is industry and blockchain agnostic, lays out the framework to provide instant utility to existing and/or planned tokens.

IQ Protocol is an open-source, risk-free, collateral-less solution to tokenize subscriptions.  Effectively, any product or service sold by a project can be turned into a subscription – where access to that solution is controlled via the project’s token.  Under this protocol, developers completely reimagined how the subscription model is executed, and has also introduced a new dimension in terms of how businesses can operate.

This open-source framework proposes a possible solution that gives each type of user what they want: protect utility users from volatility, while at the same time ensuring earnings for investors while providing some volatility to traders via the IQ Protocol.

IQ Protocol works by creating a special type of token on the blockchain.  These tokens, known as “Life-Time Value Tokens (LTV Tokens)”, are assigned a life-time value tied to a particular good or service.  For example, one LTV token may grant a token holder unlimited daily access to all areas of a trading app for the next 365 days.  These tokens are then released into the marketplace, available for interested buyers to purchase.

Once a company has tokenized a good/service for consumption, interested customers have one of two options.  They may either become LTV token holders themselves, or, they may rent a LTV token from a “renting pool”, which is comprised of LTV tokens owned by other buyers who are interested in renting out their LTV token asset.

Users do not pay to watch each episode in a Netflix series, but rather, pay a monthly fee to consume as much Netflix content which they desire.  The same goes for a Spotify subscription, users do not pay per song, but for the rights to listen to all songs in the Spotify catalog for a fixed monthly fee.

Utilizing IQ protocol, any project can directly tie their solution offerings to their tokens.  From media content to a weekly delivery of fresh bagels, any product or service can now be tokenized on the blockchain.

PARSIQ was the first ‘client’ to IQ Protocol having utilized its capacity and built the circular economy of PRQ tokens. As of today, every PARSIQ user can use the platform and build monitoring solutions simply by holding PRQ tokens as a method of payment. Under IQ, the new PARSIQ subscription model works as follows: 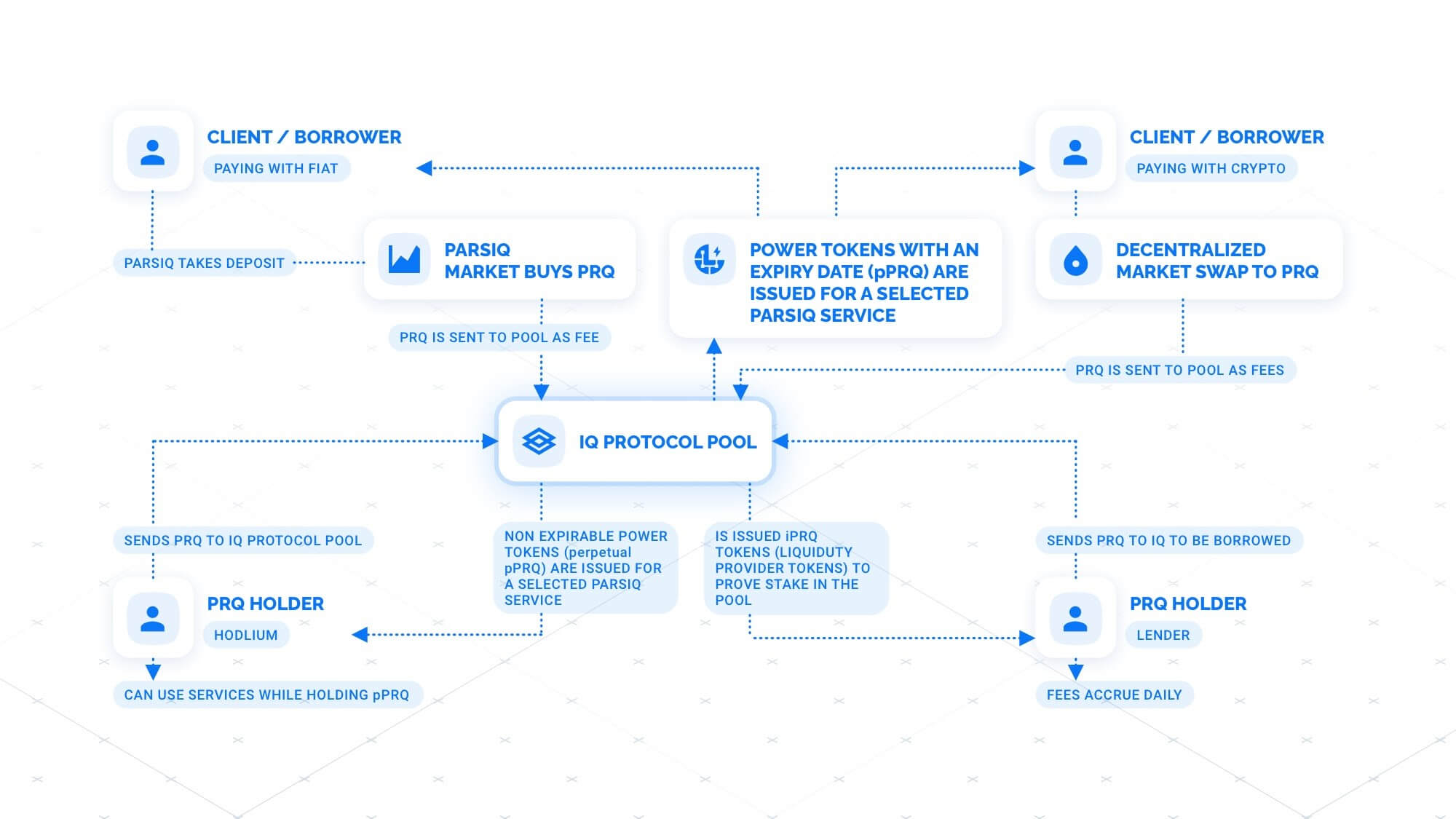 The utility of tokens must be real

Token economics is difficult.  Besides worrying about the number of tokens to issue, burn rate, and the amounts to set aside for various groups and individuals involved in the project, arguably the biggest challenge is defining a solid purpose and use case for the token.

There are many projects out there with tokens that serve little to no purpose.  And while there are projects which are unfazed by this, a strong tokenomics framework and a defined use case for a project can only serve to amplify the relevance and significance of the underlying project.  Besides providing utility, it can also be an effective marketing tool, giving further exposure and credibility to the objectives that the supporting team looks to achieve with their Web3 solution.