There are over 12,000 cryptocurrencies listed on CoinMarketCap alone, out of which there are perhaps hundreds of projects involved in bringing blockchain technology to the world. They each have bold claims of their plans to revolutionize a sector of the world, but why do so many blockchains exist? And how do they differ?.

Two of the most common types of blockchains are Proof-of-Work and Proof-of-Stake:

Proof-of-work (PoW) is a consensus mechanism that requires members of a network to use computational effort to solve a complicated mathematical algorithm to confirm mining transactions.

Proof-of-Work blockchains and tokens include Bitcoin and Ethereum, generally have scalability issues, and are seeking to resolve this with a second layer application solution.

This is crippling because the goal is increased adoption, however, the issues regarding scalability makes the network less user friendly. Every time there is a spike in price and in network usage, transaction fees go up and speeds go down. For example, on August 5, Ethereum implemented an upgrade to address the issue with high fees, but in the following month, fees actually increased.

Proof-of-Stake (PoS) is a consensus mechanism for blockchains that work by selecting validators in proportion to their quantity of holdings in the associated cryptocurrency. Unlike a PoW protocol, PoS systems do not incentivize higher amounts of energy consumption, instead, they incentivize ownership staking.

Critics of these blockchains point to downsides such as centralization and security. However, in terms of centralization, the system rewards stakers who have more of the currency.

Like PoW blockchains, these also have unsolved scalability issues.

Solana: In 2021, this blockchain experienced tremendous price expansion and publicity across social media platforms, publications, and trading communities. According to the whitepaper, Solana can theoretically process 710,000 transactions per second, however, this was not the case.

Tweets by Solana, within two hours of each other indicate the liability of promoting such a claim prior to testing. 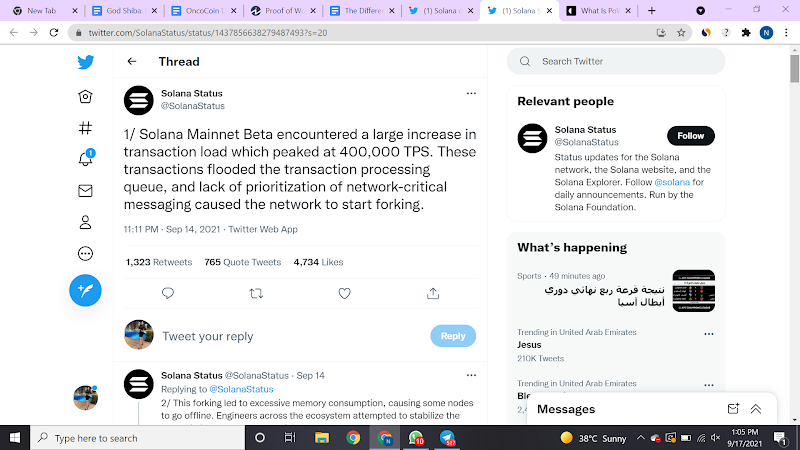 It took Solana 24 hours to repair its issues and get back fully operational.

Bitcoin, the original PoW blockchain, still has its most crippling issue - Layer 1 scalability. All other attempted PoW and PoS Bitcoin “competitors” have this same issue, and more including centralization and  security flaws.

With this gap there is an opportunity for new innovative technology, a blockchain that addresses the trilemma of scalability, security and decentralization. Kadena took this opportunity and ran with it, improving upon aspects of Bitcoin as well as other PoW and PoS blockchains.

Kadena's PoW blockchain platform consists of a blockchain which uses  Pact smart contract language. The language acts as the bridge that ties the Kadena ecosystem together, and is a powerful tool for creating applications on the blockchain. Pact is a mature language that was designed to be understood by non-coders and has been battle tested in real world projects and applications.

Kadena is the only sharded and scalable layer-1 PoW network in successfully functioning today. It utilizes a PoW consensus mechanism that improves throughput and scalability while maintaining the security and integrity found in Bitcoin. To achieve this breakthrough in scalability, Kadena has combined multiple Bitcoin-like chains together.

While Bitcoin has one chain secured by PoW mining, it brings about a highly effective blockchain in terms of security, but it lacks a solution to the scalability issue. Kadena is the only blockchain in the world that has solved this. Using Bitcoin’s successful pattern on a single chain, Kadena thus achieves scalability without sacrificing the security that plagues both PoW and PoS blockchains outside of Bitcoin.

Learn more about Kadena on social media and across the web:

Disclaimer: This is a sponsored press release, and is for informational purposes only. It does not reflect the views of Crypto Daily, nor is it intended to be used as legal, tax, investment, or financial advice