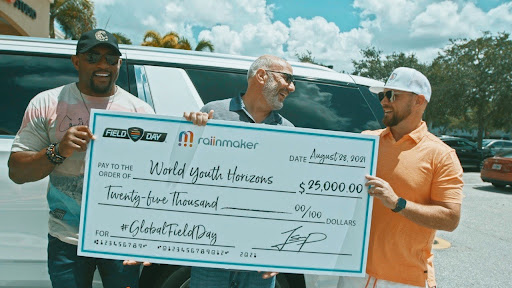 Social engagement platform Raiinmaker is leveraging blockchain to help raise money for youth and environmental charities. The app is at the center of the ongoing #GlobalFieldDay campaign, which aims to encourage kids to play after a disruptive year of lockdowns, school closures, and social distancing.

Running from August 23 to October 22, the two-month initiative and social media challenge is set to reach a wider audience this week, with an hour-long TV special due to air on Fox Sports prior to the opening night of the NFL season.

Before Super Bowl champions Tampa Bay Buccaneers lock horns with the Dallas Cowboys, a huge television audience will get to hear about the 30-day #GlobalFieldDay Challenge, which pits five teams of athletes, celebrities, and influencers against one another across three virtual fitness challenges: Pushups, Planking, and the Victory Dance.

Challenge videos will be posted to social media via the blockchain-powered Raiinmaker app, which tracks engagement and donations generated by each team. The victor will be the squad responsible for the highest social engagement and most money raised for charities. The winning team will also receive an additional $100,000 prize to donate to the initiatives of their choice.

“We created #GlobalFieldDay to celebrate a return to play after a difficult year for kids coming out of Covid,” said Tara Gore, a partner at Field Day.

“We wanted to focus on the positives and get back to being together, outside having fun. This is going to be a long-term initiative for us, and the goal is to be able to raise money for youth empowerment charities all over the world and to make a difference in the global landscape.”

To spark interaction, fans are also in with a chance of earning a share of a $100,000 Digital Prize Pool simply for promoting #GlobalFieldDay campaigns on social media via the Raiinmaker mobile app. Raiinmaker recently donated $25,000 to the cause, a symbolic value as it is the amount required to build a safe home for a group of children in rural Uganda.

Although the teams are still being finalized, confirmed participants in the 30-day Fitness Challenge include rapper Pitbull, NFL Hall of Famer Ray Lewis, TikToker Josh Richards, and Philadelphia Eagles tight end Zach Ertz. The presence of several famous social media influencers like Richards is likely to drive interactions and donations among a younger demographic.

The youth and environmental charities supported by the #GlobalFieldDay campaign include World Youth Horizons, Global Entrepreneurship Network, and Laudato Tree, the latter spearheaded by 17-year-old Vivienne Harr. Incredibly, the youthful CEO started her activist career at the age of ten, when she raised over $1 million to combat human trafficking.

Laudato Tree’s mission is to raise $42 million to plant 7 million trees across the Great Green Wall of Africa. While the environment is the focus, World Youth Horizons’ goal is to provide youngsters from different backgrounds with opportunities to see the world and find inspiration. Global Entrepreneur Network, meanwhile, makes it easier for anyone, anywhere, to get a business up and running.

“We are at a critical point as a species with the stakes higher than ever, so it’s only natural that the focus of #GlobalFieldDay is empowering the youth and specifically innovators who are stepping up around the world to solve the biggest challenges we face,” said Raiinmaker Founder J.D. Seraphine.

“Raiinmaker is proud to not only support the mission but to also facilitate a whole new approach to generating and harnessing the power of a cultural movement.”