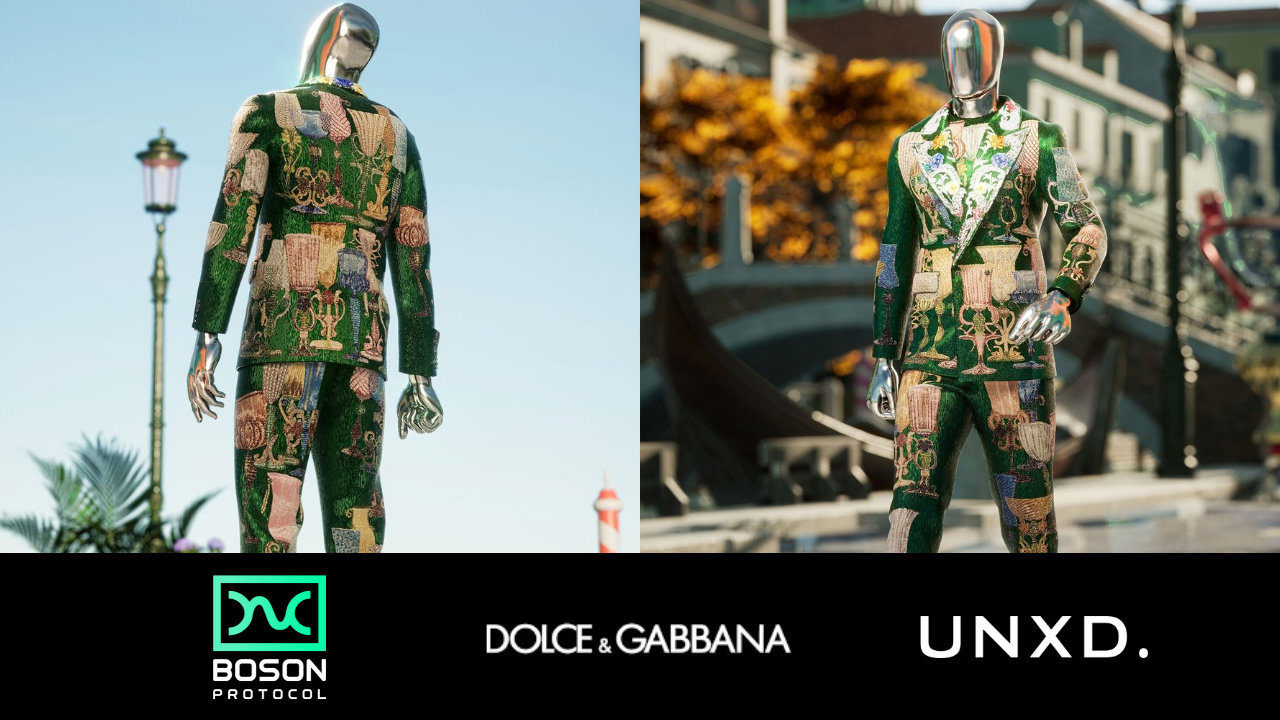 Italian luxury fashion house Dolce & Gabbana has sold over $5.7 million worth of digital and physical merchandise, a list that includes fine clothing and jewelry. Of the total sales, a $1 million suit was also sold as an NFT to a buyer, who now has a year to get fitted for the physical version. The sales also include a digital tiara worth $340,700.

The $1 million green glass suit was bought by tokenized e-commerce development firm Boson Protocol, who now owns the NFT displaying the suit’s lavish detail. A staff member from Boson Protocol has been tasked to get fitted for the physical version of the million-dollar NFT suit.

News of the collection’s debut was first covered by CryptoDaily earlier in July this year, with the exclusive “Collezione Genesi” NFT collection launched on Polygon’s UNXD marketplace. Boson Protocol, the winning bidder for The Glass Suit, bought the piece for 351 ETH ($1.047 million). Boson Protocol now owns the original digital file of The Glass Suit, which shows a video of the suit worn by a faceless silver mannequin. The physical version of The Glass Suit is woven with 72 embroidered glassworks, made with both Murano glass and Swarovski crystals, while the base contains 100% silk.

Boson Protocol is one of the first “dCommerce” or decentralized commerce platforms, and is the first known decentralized protocols to acquire a rare piece of NFT from Dolce & Gabbana. Boson Protocol is a tokenized e-commerce protocol providing escrow smart contract representations for non-fungible “commitment” tokens, enabling automation of digital to physical redemption by encoding game theory into the NFTs. The London-based protocol follows the ERC-20 token standard and allows monetization of consumer and seller data in a self-sovereign and privacy-preserving manner.

“At Boson Protocol, we have been watching with much interest the great work undertaken by Dolce & Gabbana, UNXD and of its founder and chief executive, Shashi Menon. We believe the Collezione Genesi is a foundational moment in NFT history. It connects the digital with the physical in a fascinating way — and its novel approach is why Boson acted to acquire The Glass Suit.” the firm said in a blog.

Of the nine pieces on the Collezion Genesi NFTs, five were offered up as physical versions: two dresses, a suit, and two jewel-studded crowns. NFT owners who successfully purchased the digital pieces were also offered by Dolce & Gabbana with an ‘experiential’ purchase which included a tour to the fashion firm’s design studios.