How the Husl Eliminates Intermediaries 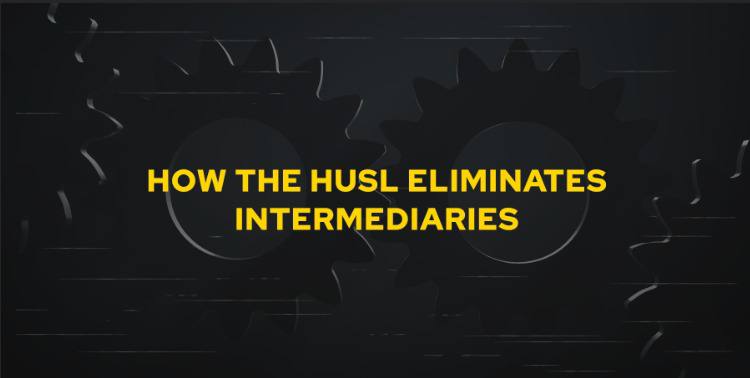 Democracy is one of the most important inventions of human civilization. Where it has been ignored and individuals have been kept on the outside looking in, great unhappiness, civil unrest and revolutions have occurred. The idea that a government could be run by the people and for the people has given humankind hope that together we could build a better world. While it has been by no means perfect, one could actually argue that great progress has been made for democracy over the past few hundreds of years.

Taking this out of the heated subject of politics, other fields still find themselves structured with ancient methods of organization. When the idea of democracy entered into the subject of finance - for the first time the legacy banking system was disrupted by Bitocin and cryptocurrencies. This did not take hundreds of years or even several decades.

Many other industries are ripe for disruption. Taking a broad look it seems obvious. A small number of inside players control the system, determine the rules, and decide who gets to participate and who doesn’t. As we move through the 21st century, more and more people are starting to question legacy systems. Are the old and ancient rules still applicable today? Have the gatekeepers acting for the good of all or have they lost their way and are using their position for their own benefit? Others find their talents and abilities held back by these legacy powers that be. Would things be better off if it was managed with a true democratic, decentralized, free system.

Much like the banking sector, the legacy music industry like many others is built on a centralized system.

The system benefits the streaming platforms, lawyers, executives, distributors, and large corporations. Most of the money from sales in the music industry goes to them, an estimated 88%. There is a reason the phrase “starvin’ record label” doesn’t exist. In fact, the very finances of the industry has corrupted it into a broken system. The middle man still sets the rules, and charges the literal fees for an artist to have their song heard on the radio or on a streaming service. The path to the top of the charts is not currently determined by how addictive the tune is or how creative the artist is. It is decided by who the legacy gatekeepers choose to finance - and profit form.

But how can this system be fixed? And who can fix it? One cryptocurrency project is determined to show the world that the answers to these questions are “yes” and “us” - the Husl.

Some consider the system broken, and The HUSL sees itself as the solution of the music industry.

The Husl brings the full-stack blockchain technology solution that the fans and creatives in the music industry have been waiting for. They do this by leveraging two elements of blockchain technology - NFTs as well as DeFi. THE HUSL’s goal is to use these technologies to radically reorganize the music economy across the globe and completely. The new economy will prioritize the industry’s key players: the creatives and the fans.

Imagine a typical experience. A fan decided to get some music from a new artist they like. A platform not so different from Spotify, except that they are buying a music track. That track actually also doubles as an NFT. This supports the artist and puts the fan in a position to directly support the artist. This bypasses the record label.

From the perspective of an investor, as time goes on and the artist becomes extremely popular around the world, the value of that NFT also goes up in value. This creates a new dynamic of a fully democratic ecosystem that rewards all participants who contributed to the success of the artist.

By giving artists the tools they need to connect directly with fans, The Husl aims to put success back into the hands of the artists themselves.

Success is grassroots: artists with diverse fan platforms will prosper in such an ecosystem.

The Launch is in Progress

12-time Grammy Award winner and hip-hop legend Busta Rhymes believes in the Husl enough to back it with his name as well as his actions. A core team member, he is playing a major part in its rollout.

As part of the launch, Busta Rhymes himself did a limited edition NFT drop, the Dungeon Dragon Gold NFTs. Here’s what he said about why he came on board:

After doing my research, figuring out what I wanted to do in the NFT space and who I wanted to do it with, it made sense to partner with the Husl for my first NFT collection. I am pretty excited about this sh**!" -Busta Rhymes

More launch updates are being delivered online here. You can find out more about the Husl.io across their social media pages: